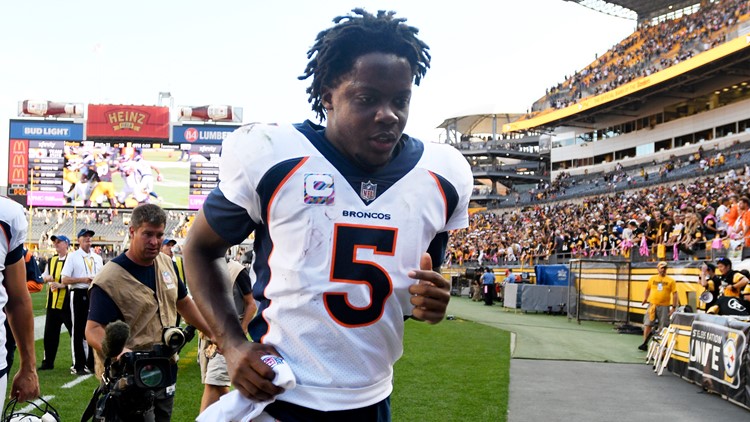 Mike Klis answers your Denver Broncos questions as the team heads into the bye week.

ENGLEWOOD, Colo. — The mailbag is bursting. It’s been a while.

I’ve covered topics that have carried the day’s water-cooler conversations before. But with the vitriol of social media serving as a 30-gallon gas can, I’ve never seen a story so quickly explode like the Bridgewater Bail Out saga.

Our astute Broncos mailbag letter writers, picking up where they left off, offer many sides to the hot topic.

Greg – You should have been a headline writer!

Yes, Darius Slay Jr. and pursuers both for and against where flying at full, 20-yard sprints by the time they reached stationary Teddy’s station. Ever the gentleman, Bridgewater gave Slay a polite nod and waited for the next possession. Unfortunately, the moment Slay arrived at the other end zone was the moment the next possession didn’t matter.

I love your presentations. But one thing should be discussed.

Do you think Terrell Davis would like to have back the one play where he played defense after an interception? He essentially ended his career with that play… in a losing effort!

I’m glad Teddy didn’t try any heroics! Made sense to me to give up, remain healthy and get ready for the next game.

Keep up with your insights, but I don’t think Teddy should be chastised for this decision.

Cliff – When I was a kid, I was a huge Joe Namath fan. To this day, I argue no player in team sports was ever a bigger star than Namath was in the late-1960s. I do remember a preseason game in which Namath chased down his interceptor and wound up splayed face down on the field with a torn-up knee. This was after Super Bowl III. I remember thinking, “Why, Joe? Why try to tackle him. Joe?’’

Had to Google up the memory and it turned out to be a 1971 exhibition game (as preseason games were called then) against the Lions and it was linebacker Mike Lucci who returned the interception.

Namath returned from his knee injury for the final month of that season but was never again the same.

I thought of Namath, and T.D., and Drew Brees — who suffered a torn labrum while trying to recover a fumble against the Broncos in a meaningless 2005 regular-season finale, as the furor exploded over Bridgewater bailing out on trying to tackle Darius Slay Jr. during the Philadelphia cornerback’s 82-yard fumble return for a game-deciding touchdown. I thought of Courtland Sutton, who tore an ACL last year while tackling an interception returner last year, and then decided not to tackle an interceptor in a game against the Raiders this year.

Did Bridgewater make a smart decision? Yes, for the long-term good of his own career and the Broncos. He most likely would have got hurt had he tried to make the tackle. It would have required stepping in front of a freight train, or “Slay-ride” as Greg put it. Not only did Slay have 20 yards of full speed ahead, but there were blockers and pursuers charging in Bridgewater’s path. Melvin Gordon, the fumbler, was blown up by a block a couple yards in front of Bridgewater.

And had Bridgewater got hurt, the Broncos’ season would have been finished.

But did Bridgewater make the correct decision? No, he didn’t. Think of all those offensive linemen who withstand an enormous physical pounding, with virtually no glory in return, so Bridgewater won’t get hurt, so Bridgewater can be the game’s hero. For a blocker to sacrifice every last ounce of sweat and pain for his quarterback, it helps when you love and, more importantly, respect the man you are charged with protecting.

Will the Broncos’ blockers block to the whistle for Teddy now? Probably. Everyone has their own families to feed. And within the prism of the contest against the Eagles, stopping Slay, or slowing him down so others could, would have kept it a 7-point game. Allowing Slay to carry on made it a 14-point, see-ya-after-the-bye-week game.

So even if it was a smart decision, it was not the right one.

Bridgewater’s admission of guilt during a Zoom press conference Monday was a major step back toward regaining trust and credibility both within Broncos Country and the locker room. But more work must be done. He’ll need to play well – and yes, even play courageously – in the next three or four or seven games to regain most of his respect back.

I can’t believe Fangio decided to go for it with 4th and 1 at the end of the third quarter. He didn’t need to do that. I was yelling at the TV: “kick the field goal.” I was visualizing 20 to 16 if they went with the field goal. But NO. Instead that ugly play that cost us the game. Bad choice, coach. Why don’t these guys know that nothing is more important than easy points on the board?

Dennis – I was saying take the field goal, too. It was really 4th and 1 ½ yards and its not like it was once second and 2 and the Broncos had two cracks at it, and a third attempt would have done it. They got close with 7-yard completion on third down, so they really only had one chance at the first down, do-or-die.

Most people say Gordon had the first down when Davion Taylor knocked it out – and statistically he was given a yard – but I’m not so sure.

Gordon deserves the most blame for the fumble and TD return. Fangio denied a lack of faith in special teams as a reason for going for it, but after a short field goal was blocked earlier in the game, he couldn’t have had the necessary 95 percent confidence his field goal operation would have been successful.

The Bridgewater Bail Out received most of the scorn, but fumbling was the greatest sin, at least in regards to the play. The Teddy Head Nod was perhaps symptomatic to a greater cultural issue the Broncos have been battling for a while now. There simply has not been enough team-before-self spirit in the six years since Super Bowl 50.

Then again, it’s a myth to say you need good chemistry to win. I agree with former Rockies shortstop Walt Weiss, who is now bench coach of the World Series-champion Atlanta Braves. Weiss once told me it’s the other way around. You need to win before you can have good chemistry.

RELATED: Bridgewater called out in team meeting for lack of effort on Slay TD return

Have you heard anything on the ownership squabble? Silence, since this summer!! Thank you for your hard work and great job, that you do!!!

Todd – Officially, there’s no more squabble. The two oldest Bowlen daughters, Amie and Beth, dropped their lawsuit against their late father’s trustees in mid-July for unspecified reasons. Beth Bowlen Wallace has always contended her quarrel was never with her siblings, but with the three trustees in charge of their father’s trust – Joe Ellis, Rich Slivka and Mary Kelly.

And while an exchange of Christmas cards between parties may not happen next month, the dismissed lawsuit clears a major hurdle from task of transferring team ownership.

Ellis, who is also the Broncos’ president and CEO, said in late-July that the process of transferring controlling ownership – either to Brittany Bowlen, Mr. Bowlen’s third-oldest daughter, or via sale to an outside investor – would commence shortly after the team’s 2021 season concludes. The regular season ends January 9, 2022 with a home game against the Kansas City Chiefs.

There is one potential impediment. The right of first refusal case the Trust brought against the Edgar Kaiser estate went to trial in September. That case is now before Denver District Judge Shelley Gilman, who is expected to rule on the matter early next year, or about the time the Broncos finish their season.

At present, the team is not for sale. The expectation is someone other than Ellis will be in control of the team by the start of the 2022 NFL season. Perhaps, Ellis will further clarify the team’s ownership situation at his annual post-season press conference. Maybe that postseason press conference won’t be held until after the second round of the AFC playoffs. Wouldn’t say such a delay would be likely. But 5-5 at the bye still keeps maybes in play.

My friends from various parts of the country are having a good time sending me video of Teddy’s ‘business decision.’ I have to ask – does his unwillingness to try to make a tackle, or even slow the guy down, hurt him in the locker room, or do the guys on the team just blow it off?

Dennis – I can’t speak on behalf of the players but I can make an educated guess based on my 34 years of covering professional sports, both in baseball and football. The answer is both – some will blow it off as social media making too much of this, that the truth for any NFL team is your quarterback can’t be placed in harm’s way. But others will think, “What the heck, Teddy?’ yet still move on and obediently follow the plays he calls in the huddle.

These guys are all trained to just take care of their own jobs.

Bridgewater may have to choose his words carefully as he communicates. The “Come on, guys, we’ve got to stick together,” exhortation could be met with a few eye rolls. Basically, it will come down to whether Bridgewater can lead the Broncos to wins. If he plays well and the Broncos beat the Chargers on the other side of the break, then they’ll follow Teddy to Kansas City for the game against the Chiefs on December 5.

Beat the Chargers and Chiefs with the winless Lions coming to town for a game on December 12? Then it will be thank goodness Bridgewater didn’t step in front of Slay and the mantra “In Teddy We Trust” will permeate the locker room again.

But lose to the Chargers and Chiefs? In that scenario, it will be difficult for the guys in the locker room to stick together.

> Top stories curated daily just for you! Sign up for the 9NEWSLETTER to get can’t-miss stories, Next and Broncos content, weather and more delivered right to your inbox.

MORE WAYS TO GET 9NEWS

HOW TO ADD THE 9NEWS APP TO YOUR STREAMING DEVICE

ROKU: add the channel from the ROKU store or by searching for KUSA.

For both Apple TV and Fire TV, search for “9news” to find the free app to add to your account. Another option for Fire TV is to have the app delivered directly to your Fire TV through Amazon.